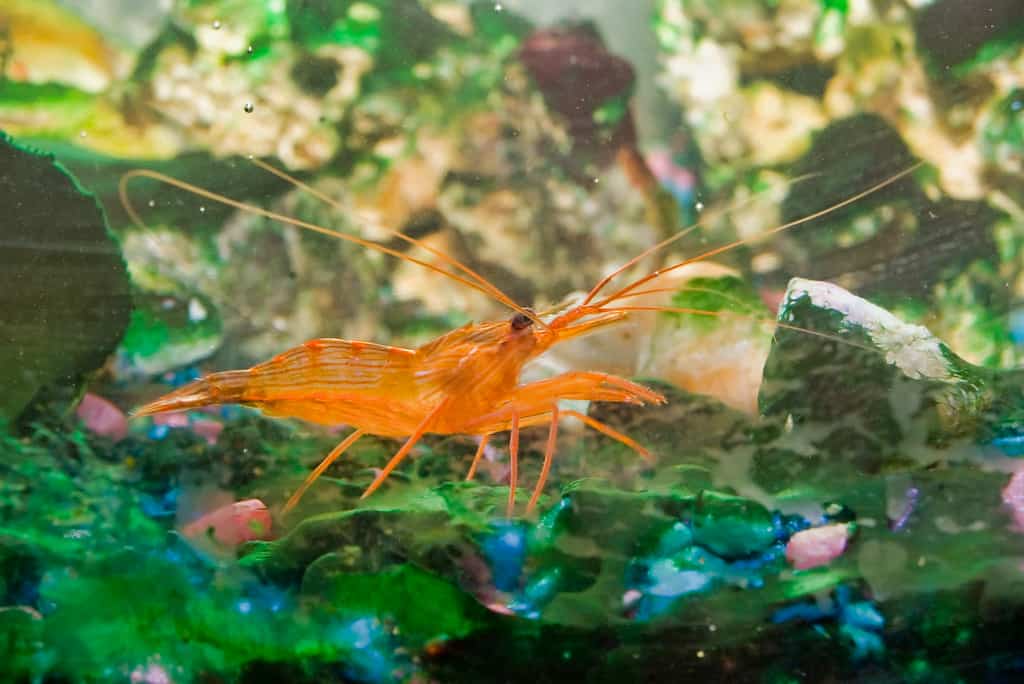 Setting up a reef aquarium with a peppermint shrimp is easy when you know how to establish equilibrium with all the biota in your tank.  You want to include just what is right and avoid what you dislike; the feared pests top it the most, Aiptasia anemones!

Aquascape enthusiasts will always include a "CleanUp Crew" in their tank to get rid of the nuisance anemones, algae, food debris, feeds detritus and dead organic materials. Algae eater fish, livebearers and bottom feeders are best doing that work, but now it includes the aquarium shrimp known as the Lysmata wurdemanni in the list.

Peppermint shrimp specimens originated from Charleston in South Carolina and Key West in Florida. It spread along the East Atlantic to the Caribbean Sea.

These shrimps live closer to the vertical shafts of the reefs, which are its natural environment. Some live in pipe sponges above the wave base.

The Caribbean cleaner shrimp is a well-known ornamental seawater invertebrate that has a transparent look with a white stripe on its body and several thin red longitudinal lines.

This pretty shrimp sweeps clean your tank and adds pleasant shading to it. Including a pair of pep shrimp in your aquarium is enough for a good display.

Its lifespan can reach two years or more depending on the condition of the environment. It can reach its maximum size of 2 inches when grown into an adult.

Pep shrimps became popular in the aquarium trade because the shrimp had a calm temperament and undemanding status.

Now, the demand grows higher because they found out about its dirt-eating qualities contributing to the cleanliness of the tank.

Lysmata wurdemanni is always available in any local fish store at 5-10 dollars. You might be lucky to purchase it at a lower price, and sometimes on a buy-one-take-one basis.

A peaceful Veined Shrimp could make an excellent addition to your tank because of its beautiful appearance. It also sweeps off the dirt and the unwelcomed anemones.

It eats aiptasia and other pests that can affect your ecosystem. Thus, it will let you save from buying pesticides.

Another advantage is that it can scrape dead epithelial cells from the fish. Would you believe it eats even dead tissues from your fingers?

This shrimp maintains its reef-safe status but not at all reef tank-safe in captivity because it picks at and nips food from your soft corals. It is playful and easy going with its same species, but it can sometimes fight other shrimp species in pursuit of foods or territory.

Some reef tank hobbyists subscribe to a mixed notion of whether to include a pep shrimp because of these foul experiences. A thorough study will help you come to a decisive point.

But if you think of its nocturnal and soft temperament, you will think twice. It can be shy for a moment, during day time hiding in the small spots of your rockscape and corals.

Your shrimp can hide for several days. Sometimes it gets out for a while during feeding time, and it swims along the water column.

If you have kept some pep shrimps in your aquarium, we recommend only a few. If your tank is small, save one.  These shrimps tend to become aggressive and fight one another.

Reports claimed that a lot of aquarists do not consider Lysmata wurdemanni as an ideal tank cleaner because it cannot do as much. Have it in a marine aquarium with fish rather than a reef type where it might nip on corals.

Since the shrimp is gentle and easy to keep, it can get along well with other inhabitants in the aquarium with its kind.

There are some hobbyists’ experiences that pep shrimps can eat their small starfishes, but it is not at all confirmed. What is sure is that these shrimps steal food particles from the starfish. They can also finish your feather duster worms in your tank.

There could be predators preying on them in a marine aquarium, so know the fish species you will join your pep shrimps. Also, you do not put it with larger fish that can eat them.

Lysmata wurdemanni is active at night and will come out of hiding when the light gets dimmer. It will best suit an environment with live stones, rocks, hardscape as hiding places, and enough spaces to hunt for food.  Its best tank region is nowhere far from where it used to hide. 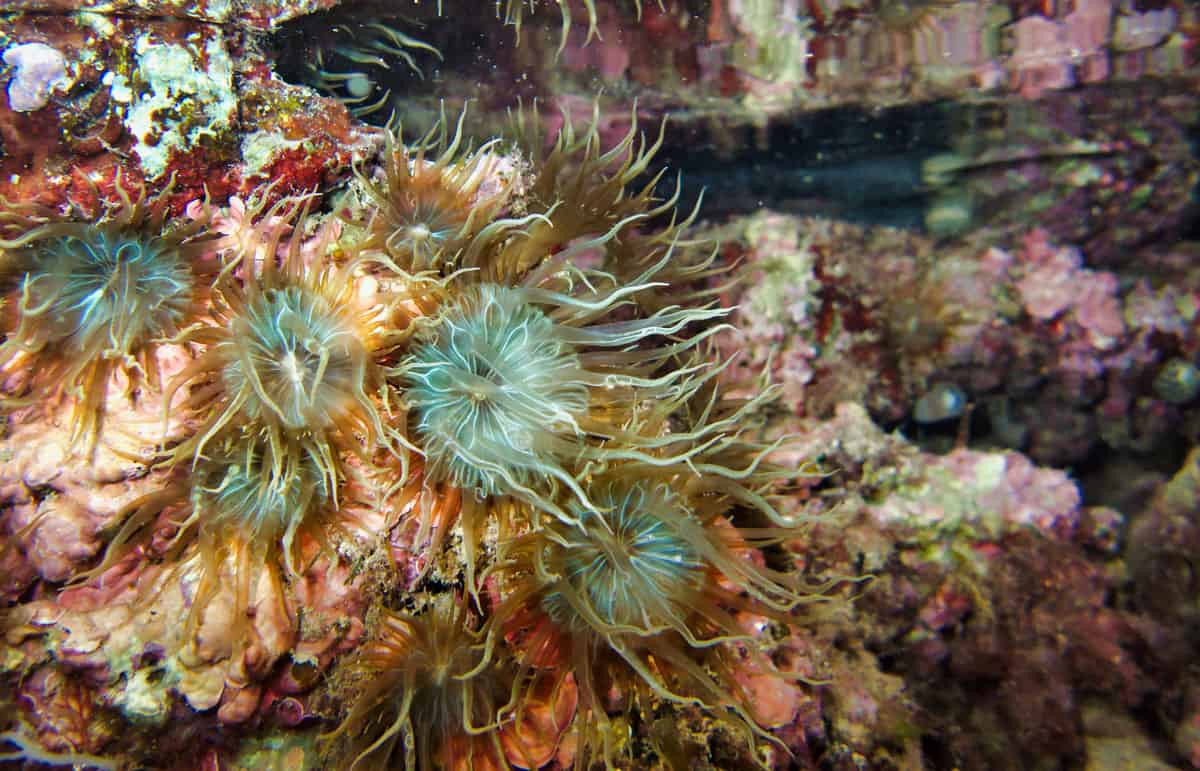 Although the Candy cane shrimp is an aiptasia-eater, it prefers smaller anemones than the larger ones. It roams around the tank scavenging and hunting for food particles in the substrate such as leftovers and dead meat.

You should feed them well so they won’t be nipping on your corals searching for bits and pieces. Some sinking shrimp pellets or small pieces of fish meat can satisfy your pep shrimps in its feeding routine.

Like most invertebrates, peppermint shrimp cannot tolerate high levels of copper and nitrate and various changes in water parameters. It needs iodine supply as well because it has the habit of plucking the shell.

How to Breed Peppermint Shrimp

What’s best about shrimp breeding? Being reported as “easy” and great value for your money. It is now being raised at home by hobbyists and even more at the aquaculture trade.

Your pep shrimps are ready to mate in just hours after undergoing molting or shedding off its outer layer covering.

Mating is an easy and quick process, just needing two random shrimps in good health. Shrimps are hermaphrodites, which means they have both female and male reproductive organs.

Even a single shrimp can produce eggs after every molt, but if there’s no partner in mating for fertilization, the eggs won’t hatch.

Your shrimp will lay a few eggs in a bluish color.  After 12 days, the eggs swing to a silver color, which shows that these are ready to hatch.

Hatching takes place at night until you see these little shrimps swimming to the direction where light comes in.

The awkward stage in the shrimp breeding process is getting the babies (larvae) as quick as possible, at least after the sun sets, and before another molting process takes place.

There should be enough tank space to reduce larvae predation as they hatch. Some inhabitants in the environment tend to eat the eggs.

During the hatching night, turn off the filtration as you collect the babies using a specialized device called the “larval snagger.”  You will need a rearing container where you can transfer the eggs. After the process, you may turn on the filtration again.

Now that you could keep the babies safe, rearing comes easy as you only need baby brine shrimps to feed them. As these become their first foods, try to enrich it with more supplements that you can avail of from your local fish store.

What makes it a lot easier when you try shrimp breeding is that there’s no special tank required to keep the larvae; you can improvise your own. A standard 8-gallon glass tank will do (or a plastic gallon container) as long as there are a heater and air for circulation.

Make sure it gets a dark surrounding in that small environment to prevent the larvae from congregating. Now, the hatching begins until the 35th day as they swim and find the light. You can feed them with more significant food pieces like Zooplankton and Cyclops.

To date, breeding is being done successfully either through commercial farms or in home aquariums. If you want to learn more about this hobby, you are most likely to adopt a pair of pep shrimps and go from there.

If you want to venture into breeding shrimps and most likely to sell them, you can get a good value for your investment as they replicate fast.

The Caribbean cleaner shrimp species are the best ornamental species of shrimp in the aquarium trade, although the most common species like Lysmata boggessi are the ones mostly harvested for aquascaping. It means that the decorative type is getting scarce from its natural environment and might cause severe effects on its wild population.

It now depends on some captive-bred pep shrimps to continue its life cycle as they provide care and nutrition to extend its lifespan.

These aquaculture alternatives are better off to produce disease-free peppermint shrimp species rather than harvesting from the wild where they are susceptible to stress and diseases from handling and shipping.