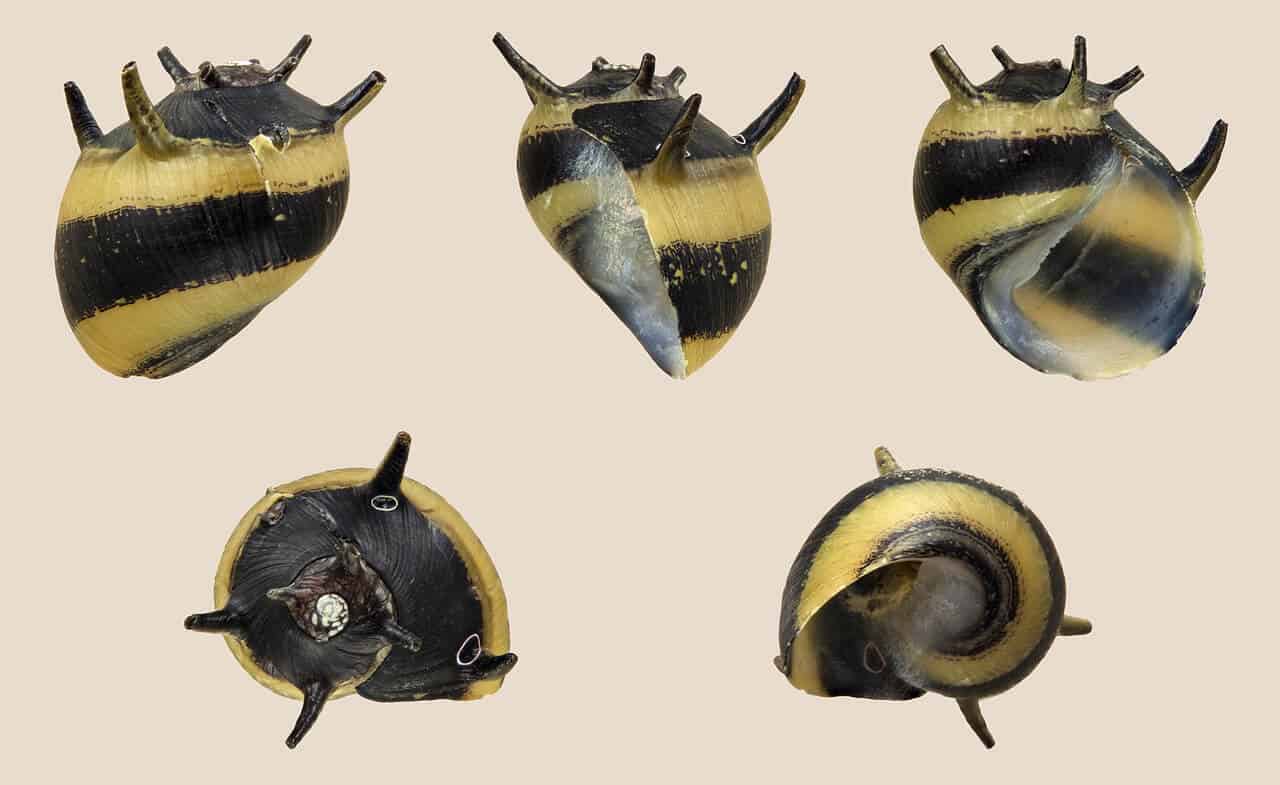 Snails are beginner’s specimens because they are easy to maintain. They belong to your tank’s clean-up crew because they roam around in search of algae.

The Neritidae family has 200 species of snails of which the horned nerite snail belongs. It can survive in freshwater and saltwater alike.

There’s no problem keeping types of nerite snails in a small aquarium as they won’t consume a lot of space because each of them only measures less of an inch. They are not at all demanding and do not reproduce fast compared to other snail species that can take up your tank in no time.

Where is Horned Nerite Snail's Origin?

Like many other aquascape plants and fish, the snail is also originated from Southeast Asia.

The species of horned nerite snails inhabit Asian rivers and streams. They love brackish waters so you can find them along deltas and seashores where they thrive.

A lot of snail species can adapt in both fresh and salty waters. Those of Eastern African origin can live in brackish waters, whereas those from the Caribbean coast and the Pacific prefer saltwater.

Snails have four tentacles that serve as their senses. Its hard-shelled coiled body enables them to move side to side, pushing the snails forward.

Although snails are shelled creatures sharing similar structures and shapes, they differ in body markings and colors. Thus they vary.

What are the types of nerite snails?

Snails move very slow. Hence, the term “snail mail.”  The horned nerite snail is peaceful and can get along well with other fish and invertebrates. They fall prey to other tank mates. Therefore they should not be in bigger tanks.

Snails can fall over as their foot is flexible. Sometimes they turn upside down or flip over, which rendered them helpless but to wait for the changing flow of water.

Just like humans, animals need sleep, too, and nerites are no different. Snails sleep in a 2-day-cycle or nap for seven times in 15 hours. Snails are awake for an extended period, like 30 hours.

Nerite snails are universal in their coastal habitats (estuaries, mangroves, and deltas) with plenty of algae-infested rocks. If your marine tank can mimic this habitat, these snails will thrive.

Nerite snails are adaptable in the wild but not at all times submerged because the water level on the coast depends on the tide.

They climb above the water surface at nighttime and stay there. Maybe snails want a breath of air before submerging back to the water.

Therefore, allow some space for them to climb up the tank by lowering the level of water.

Saltwater setups should have hiding spots, holes, and crevices. Using lava rocks can do the job. Algae will grow on these rocks, a food source for your nerites.

Your horned nerite snail* has sensitive tentacles that might scratch when they dig into the substrate. Therefore, an excellent substrate to use in your marine-type setup is fine-grained sand enriched with calcium.

As I mentioned, snails can live in saltwater and freshwater like other species of aquatic plants and animals. Setup for freshwater aquarium for the care of nerites has a slight difference with the reef or marine type.

Some rockscape and hardscape like driftwood are best for freshwater tanks. Include aquatic plants like the slow-growing Java fern. Nerites won’t harm your leaves, for they don’t eat them but the algae on the leaves.

Similar to saltwater setups, your freshwater tank should also have a fine-grained sanded substrate. Calcium strengthens the Nerite shell, and our freshwater contains it.

About snails climbing the water surface, lower the water level to create some space for climbing, then secure your tank with a lid.

The ideal water parameters for both saltwater and freshwater setups for snails have no difference but the salinity of 1.020-1.028sg for the saltwater. Ensure that your water is free of ammonia and nitrites, a filter should be in full swing, and a heater must always be at hand.

When you’re planning to add some snails in your tank, add a few firsts, and observe how they adapt with other tank’s occupants.

I recommend 1-2 types of nerite snails for a 10-gallon tank. You can keep them in a giant aquarium as long as you keep the ratio, 1:5 (1 snail every 5 gallons of water).

You need to consider the number and sizes of fish, the behavior, and required water parameters for each when joined by a horned nerite snail.

As peaceful as the snails, tankmates must not be aggressive. Avoid joining them with large ones, territorial fish, and cichlids.

Tetras, Guppies, and Barbs are perfect tank mates. Snails can get along well with its species and also shrimps like the “ghost shrimp.”

Availability in the Market

There are types of nerite snails that are easy to find in your LFS and online, costing around $4 each, or maybe cheaper by the dozen.

But the exotic horned nerite snail commands a higher price tag because it’s hard to breed them when in captivity.

The snail is a voracious algae-eater. The horned nerite snail will feed on algae, so you must estimate the tank size to come up with how many nerites you will put in the tank.

Algae build-up is a common sight but can become scarce in time. See that there will be enough algae for your nerites, so they don’t go hungry.

Green algae are a traditional favorite, and bottom feeders ignore the brown, black, or hair algae. These algae types that algae-eating fish are leaving behind are enough t.

Some feed to keep your horned nerite snail healthy include:

Turn off the filter during feeding time so your nerites will have time to nibble food. Cleaners may lift pieces of veggies high up, and the slow-moving snail can’t catch them up anymore.

Snails eat their meals on the substrate. If there’ll be leftovers, siphoning within three days is safer so they won’t rot and cause the water to go cloudy and polluted.

There’s no problem with leftovers when your tank has an aquaponics design. It cleans by itself through plants and fish mutual relationship (advanced biological filtration)

Hobbyists are having second thoughts about keeping snails, for they might infest the tank with several them in no time. Some snails species reproduce so fast, so they turned to be pests more than pets.

Nerites are becoming popular because your local fish store will always tell you they won’t reproduce in freshwater aquarium. They will, but larvae might not hatch.

But, your LFS might recommend you a horned nerite snail* because they don’t reproduce as much. If you are lucky, you might raise two or three in one breeding season.

Most of the time, luck isn’t on your side, the horned nerite snail eggs will not further develop because they prefer brackish waters, like in the wild where they can thrive most.

Because of the snail’s short lifespan,  hobbyists may breed them on their own. Find your luck, for you can always try to reproduce them while in captivity, anyway.

Most snails can reproduce asexually, except the nerite snails don’t. Female produces horned nerite snail eggs, and the male fertilizes it, like with the fish.

The eggs will spread in the tank and will become larvae in a few weeks. If you have a keen eye, horned nerite snail eggs look like white lines or dots.

You’re lucky if you find horned nerite snail eggs along the tank’s edges and hard surfaces and if they can survive in a freshwater environment.

If you’re that persistent to breed nerites, try these tips: -

Snails are best at consuming algae, detritus, and leftover debris. However, they will require extra food if kept in a large number. Follow the prescribed ratio in keeping them so they can live longer.

Add variation in your tank specimens and include a horned nerite snail species. They will keep down the level of algae while providing an exotic look in your aquarium.