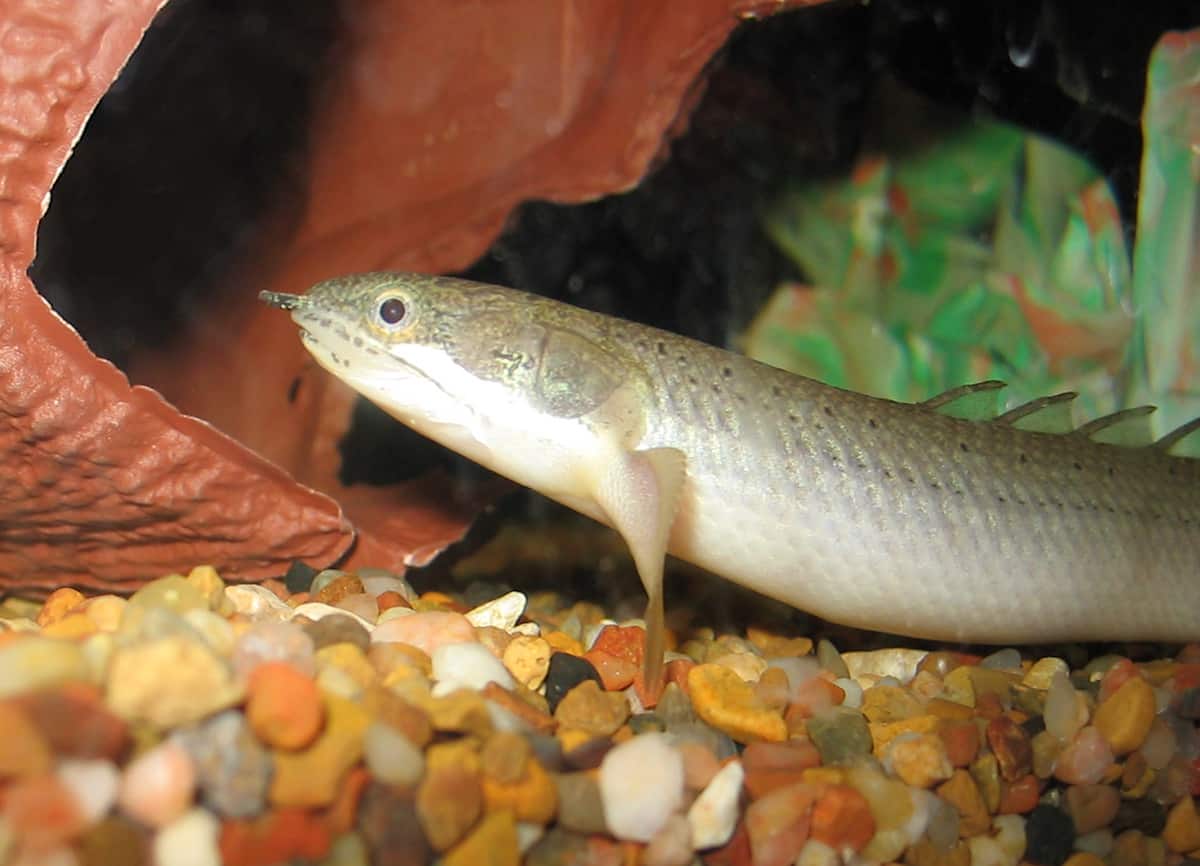 A Short Intro on its Origin

Found in the fresh waters of Africa and its subcontinents, Dinosaur Bichir is a primitive fish that originated from prehistoric species dating back during the dinosaur age (60 Million years ago).

Its scientific name is Polypterus senegalus under the species of Polypterus genus.

It is a member of the Polypteridae or Lobe-Finned Pike family. We also know it commonly as Polypterus bichir of the order Cladistia we can see mostly in the upper Nile and its adjacent waters and esteemed as food.

Its common names are “dinosaur eel,” “dragon fin,” or “dragon fish” in the aqua pet shop.

If you plan to find Bichirs in the wild, you can find them in swamps, river margins, lakes, and floodplains.

Its distribution is widespread from the Nile basin to West Africa. You can find the fish in the following countries and locations:

The Bichir species is captive-bred, but is endemic and wildly caught from the rivers and streams of Africa.

In India, you can find these predator fish in vegetated waters; that is why we also call them as “swamp dragon.” They are so common you'll find them chilling in roadside ditches.

Dinosaur Bichir is predominantly brown, grey or beige with an elongated and vaguely cylindrical body.

The scales can have shades of pink, white or blue in dots and darker blotches, which are way more significant than other fish. Did you know females are typically larger than males?

Bichir’s face is smooth, and the nose is rounded with external nostrils protruding from the front.  Its eyes are pale yellow with a black pupil that are located on each side of the head. The Swamp Dragon’s mouth is large and appeared grinning when closed.

These fish can grow up to 30 centimeters and are being protected by its thick scales which serve as their defense from injury. This is how they differ in eels that are having no scales.

Bichirs resemble a snake structure but with large pectoral fins on their back from which they got their names from. A serrated dorsal fin runs along the body until it meets the pointed and flat caudal fin.

The pectoral fins attached just below and behind the gill openings. They are the primary means of locomotion providing slow, wavy movements that contribute to its elegant appearance. Its snake-like body and tail fin help them swim so fast when chasing prey (those smaller fish in the water.)

The Dinosaur fish has a primitive lung-like paired swim bladder we can consider as a modified swim bladder with gills that allows them to adjust in water with a low level of oxygen and likewise, breathe air when they shoot up to the surface. This enables them to survive out of the water easily.

They can stay on wet ground for an extended period but must return to the water for necessary respiration.

Dinosaur Bichir's Behavior You Should Know

When excited, the fish can swim in its environment, hunting, feeding, scavenging or just about exploring and investigating changes in its habitat.

If you are getting over one bichir, an unusual behavior you'll find out is they sometimes follow each other.

Most of them are inactive at the wild during nighttime while in captivity they are nocturnal.

Sex of a Bichir can be determined when they have grown at least 6-7 inches long. It takes six years for these fish to mature and become sexually active.

The Swamp Dragonfish is not picky about its prey and can eat almost anything. Even if a fish is too large to swallow, it may try anyway. This is why tankmates have to be at least half the size of the dragon bichir.

These fish can live up to 20 years if given right living conditions.

Bichirs are predators hunting for prey, therefore considered as voracious eaters.  In common term, we can call them as bottom feeders.

These fish have poor eyesight but have a keen sense of smell beneficial to food-hunting. You may think they could not catch live foods because of poor eyesight; they can gobble prey in split seconds. Remember that their other sense is double the time keener.

If you are hobbyists maintaining Bichirs in a large aquarium, you can give some live or frozen meaty treats being their favorite.

Bichirs are appropriate for hexagonal and tall fish tanks because their lungs allow them to thrive in oxygen-deprived water. A wider tank that has a larger footprint is the best set up for Bichir regardless of the height.

It is a good thing though that this fish can adapt to regular tap water and are not sensitive in any water condition or pH level.

Bichirs from the tropical origin are best to adapt in water temperature ranging from 24 to 28 degrees Celsius.

For instance, 180 gallons of water is just enough for an adult Bichir.

Install a filter of the best quality that will allow good air and water flow.

We suggest dimmer lighting for your aquarium because Bichirs by nature are nocturnal and sensitive to bright lights.

When you set up the tank, take note that Bichirs are bottom feeders.

A lot of hobbyists choose bare tanks for Bichirs. Helpful decorations like smooth rocks, bogwood, aquarium sand, live weeds, and some pebbles will be useful as its retreat or hiding place.

Bichirs do not require high maintenance; you can always provide a good living condition for these fish in reasonable care. Regularly check that filtration is functioning well, lighting is dim, and decorations do not get in the way.

Occasionally tank maintenance is also essential to keep its optimum health. We recommend at least twice a week for cleaning the filter and tank itself to do away with the biological waste these fish produce.

As a Dinosaur Bichir owner, you'll always need to do research regularly to keep yourself up to date. Be knowledgeable if you are a hobbyist and take part in forum discussions in different fish lover’s websites.

You will get answers to various questions in mind and opinions from experiences of other aquarists.

Giant catfishes, Arowana, datnoid fish, and stingrays are perfect mates for Cuvier Bichir, the other name for dinosaur eel. Make sure that these tank mates bear the same size as that of the dragon fish; otherwise, they might fall into prey.

Swamp dragon fish can be stressed easily, not because of aggression but due to poor eyesight, often they thought other large fishes are preying them in the tank.

As a sign of defense, Bichirs can move so fast as if they are bound for an attack. Take note you should cover every gap in the hood of an aquarium to avoid slipping out of the smallest spaces.

Bichirs can be aggressive, be it of the same size, another type of fish, or even from the same species. They snap each other in pursuit of territory and hunt for food.

Finally, it is better off for hobbyists to keep a lone fish per tank. If you want to add a bit of mystery to your fish tanks, the exotic Dinosaur Bichir is a perfect choice.